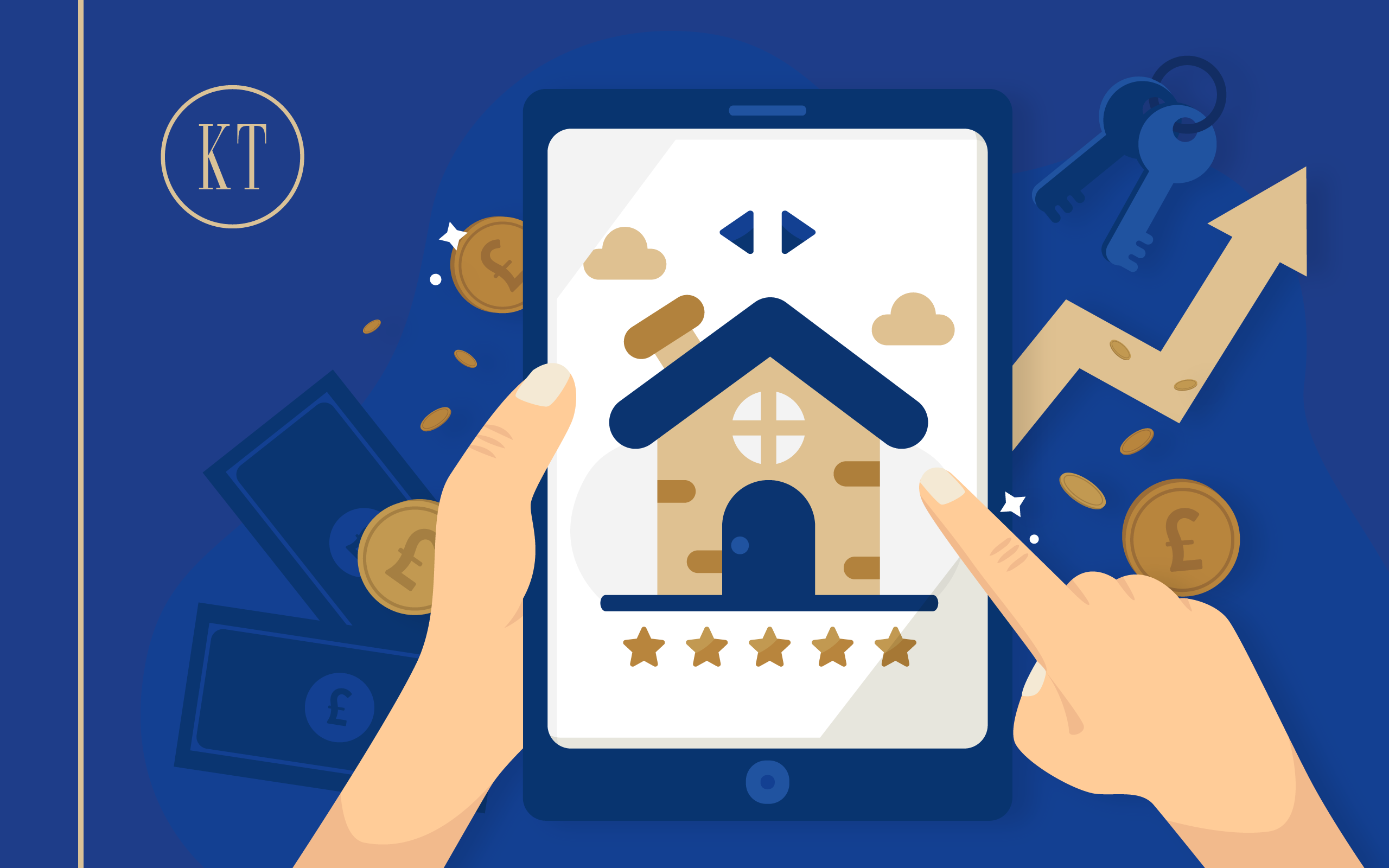 A couple of months have now passed since the Bank of England increased the interest rate to 1%, the highest recorded rate since 2009. The cost of purchasing property has continued to rise significantly for several months, and an intervention has been made to encourage people to save money amid concerns over the increasing rate of inflation.

In the Wirral and West Cheshire property market, the average listing price on Rightmove rose above £280,000 for the first time in April 2022. The question is, are prices beginning to settle and is there still sufficient demand in the market to encourage further price increases?

Looking at Rightmove new instruction data for May and June, the average listing price has continued to rise above the previous record level to £297,000 for property across Wirral and West Cheshire. The line graph (below) shows how average listing prices have followed a similar trajectory as we emerged from the first lockdown in 2020, although at a much steadier incline than this year. 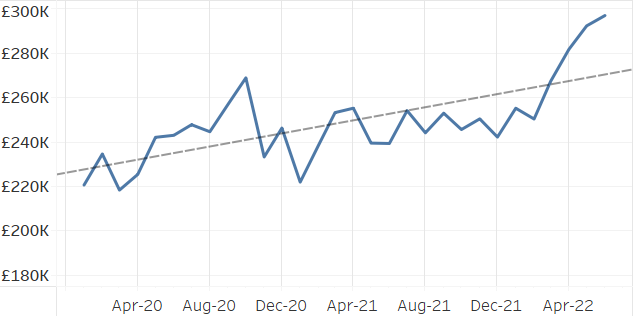 A continued rise in the average listing price, as seen between March and June this year, is typically in response to high levels of demand coupled with a shortage of supply. Despite the economic challenges facing many in 2022, such a higher fuel prices and energy costs, demand for property locally has remained strong, thus increasing competition between buyers.

The early signs suggest that the level of demand for property is beginning to drop as we head further into summer. Seasonal factors will also play a role as nice weather and summer holidays can cause a reduction in viewing numbers; typical of pre-pandemic summer activity. Karl Tatler data shows the volume of new applicants registering and viewing have dropped slightly each month in 2022, suggesting a gradual cooling in demand. 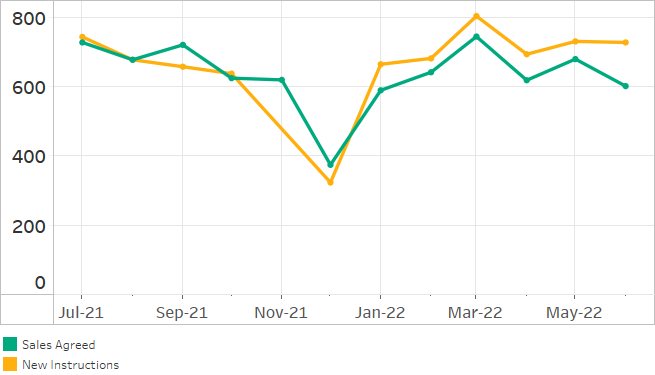 For each of the past six months, the volume of new instructions has exceeded sales agreed on Rightmove. These local market dynamics are much more aligned to pre-pandemic times where new instructions levels are typically higher than the sales agreed. When comparing this to the same period in 2021, sales often matched or exceeded new instruction levels meaning demand intensified and prices were forced upwards.

Analysing each postcode individually, there is a distribution between areas that have already began dropping in activity levels, and those which are still rising. The table below shows that CH48 saw the greatest increase (24.2%) in the volume of new instructions from quarter one to quarter two this year, while CH62 experienced a 21.5% decrease in the same period. 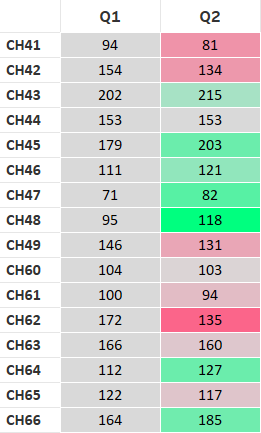 Overall, just 7 of the 16 local postcodes saw a rise in new instruction levels from Q1 to Q2, suggesting that increasing levels of activity has become more localised to certain hotspots around Wirral and West Cheshire.

Looking at the average instruction price, which is the price when originally listed on Rightmove, all but one postcode (CH61) has seen an increase from the first quarter of 2022. These prices are only a guide, as final selling price data isn’t available until several months after completion. The logic, however, is that if sales activity remains strong then the asking prices have been set in accordance with demand. 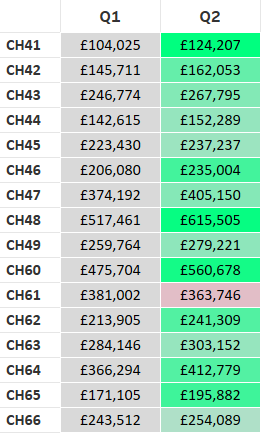 Where rising prices are concerned, it is also worth considering the type of properties being listed. In CH48, for example, the average listing price rose nearly £100,000 from Q1 to Q2 this year. That seems a huge figure, however, there was a 48.3% increase in the volume of detached properties listed in Q2, which will have inflated the figure. Many other postcodes also fit this trend, as it is common for chains to build throughout the year from lower to higher value properties; hence why there’s such a significant rise in many areas.

We have seen average listing prices rise sharply and consistently this year across Wirral and West Cheshire, while sales activity has been strong enough to suggest asking prices, on average, won’t be too far from final selling price. While some postcode areas are still seeing increasing levels of new instructions, many have experienced a slight volume drop in Q2 which could be a sign of the market beginning to cool.

It is clear that over the past twelve months, demand for property has been incredibly strong and therefore asking prices have reflected the volume of enquiries coming in. However, Rightmove data in June shows that the volume of new instructions was 21.0% higher than agreed sales; the greatest gap between the two activities since December 2019.

Given the increase to interest rates, which makes borrowing money (a mortgage, for example) more expensive, it appears that demand for property at the current price levels has started to reduce. The price reduction will become a key driver of the market in Q3, as properties may risk going unsold if prices aren’t aligned with the current economic climate for buyers. An increase in price reductions should spark some more interest and close the gap between stock levels and demand.

The school summer holidays have now begun which usually has an effect on the property market; perhaps more so given many families won’t have been away over the last couple of summers. There should still be plenty of buyers around, but reductions and more affordable asking prices may be required to ensure more sales proceed over the next two to three months.

If you would like to know what your property is worth, please click the link below to arrange your free valuation.