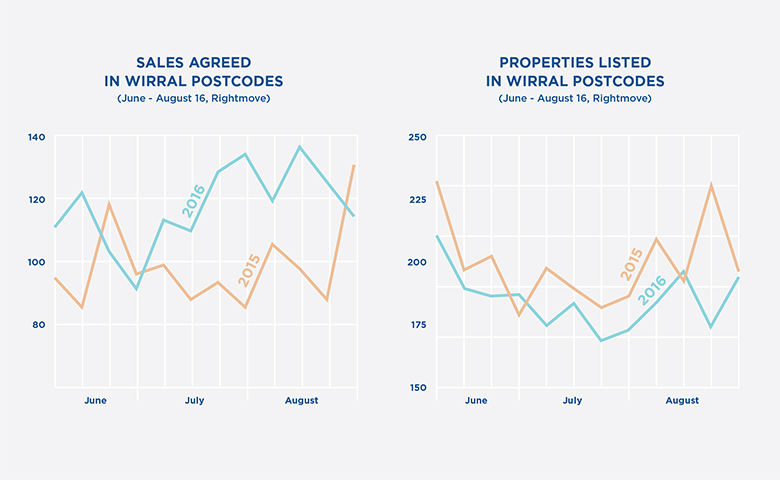 The UKs decision to leave the EU in June posed many questions about how the economy would respond in the wake of such uncertainty and change.

The property market, understandably, has attracted much media attention over the summer months, particularly after the interest rate was cut to a record low 0.25%. This encouraged buyers to proceed with their agreed sales, while promoting more favourable mortgage offers for prospective buyers in the future. Buyer confidence is critical to the stability of the market, and activity over summer has certainly reflected this across the Wirral.

Compared to the summer of 2015, which proved a successful period, there was an increase in the volume of sales agreed across the Wirral this year. With better mortgage offers available and a diverse range of properties across the Wirral, we have seen a 16% increase in sales this summer. The last eight weeks were particularly encouraging, given activity typically slows down over school summer holidays.

Contrary to sales activity, new properties coming to market this summer were slightly down on last year’s figures. There was a hesitance in the run up to the referendum as the public awaited the result before making a decision. Once the dust settled and reports suggested market optimism, we saw a steady increase in new property listings towards the back end of summer, although holiday season restricted further growth in late August.

Our sales offices have seen the number of viewings per sale decrease over summer in comparison to 2015, while still maintaining similar sales volumes. We have found that buyers have been able to source better mortgage deals to facilitate smoother transactions, particularly since the interest rates were cut to 0.25%. There has also been a change in the mindset of some sellers who look to set a more realistic asking price to ensure sufficient interest from instruction.