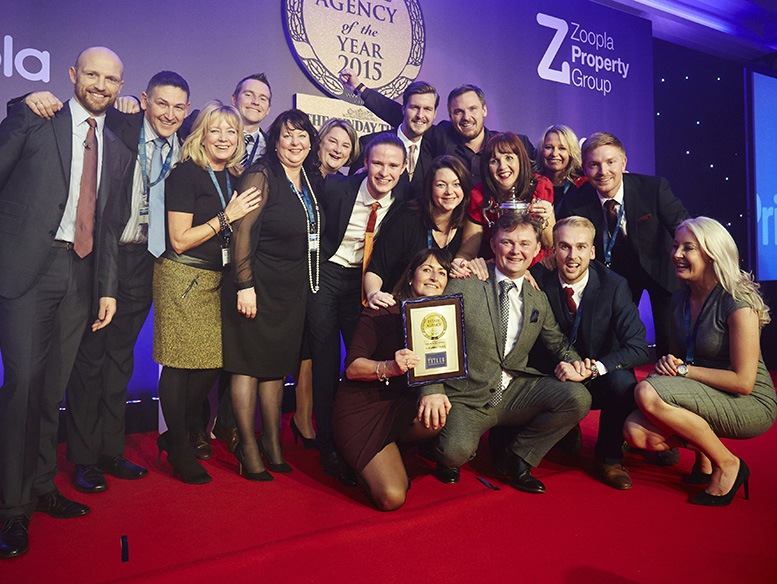 Wirral-based Karl Tatler Estate Agents has been crowned as the best estate agency in the UK at the national Estate Agency of the Year awards.

Karl Tatler was competing against over 6,000 offices from across the country to take the headline title of ‘Overall Winner of the Estate Agency of the Year Awards 2015’.

In addition to the coveted top title award, Karl Tatler scooped four other accolades at the glittering ceremony in London. The independently owned company won Gold for ‘Best UK Small Estate Agency’, Gold for ‘Best Training and Development’, Bronze for ‘Large Customer Service’ – all national awards – plus a regional title of Gold for ‘Best Small Northern Estate Agency of the Year’.

Managing director Karl Tatler said: “To win the ‘Overall Winner of the Estate Agency of the Year Awards 2015’ is a tremendous achievement – the entire company is elated! To compete against thousands of exceptional agencies across the UK requires a proven track record of success. I am incredibly proud of my amazing staff and delighted that their dedication, hard work and commitment to providing a remarkable, personal service to all our clients has been recognised on a national stage.”

Karl added: “This year has been a record year for us. In addition to the awards we have won, we have sold more houses on Wirral than any other estate agent in the area* - and all in the year in which we celebrate our 18th anniversary as a business. People choosing Karl Tatler to sell their home can be confident they are entrusting their greatest asset with the best possible agent who is renowned for honesty, integrity and professionalism.”

The event on the 4th December 2015 was the culmination of a rigorous and thorough judging process. A panel of 20 industry experts assessed written submissions before conducting an extensive review of the entrants, which included over 150 hours of telephone interviews and independent mystery shopping exercises.

Now in its twelfth year, these awards are widely recognised as the most prestigious and difficult to win, with this year welcoming a record number of entrants.

The judges explained why Karl Tater Estate Agents won: "This is a business that is recognised time and again in these awards, and every year the judges are amazed to see that Karl and his team have managed to raise their standards even higher – no easy task for an innovative market leader. The agency was mystery shopped a number of times and achieved amazing scores across the board. This is a business which is known for its honesty and integrity, and customers using this agency are in excellent hands.”

The whole of the judging process was overseen by The Property Ombudsman, Christopher Hamer, and Gerry Fitzjohn, VP of The Property Ombudsman who acted as Arbiter. On the night of the event, winners were presented with their awards by Wirral-born international rugby star Matt Dawson MBE. Renowned journalist, author and newsreader Penny Smith was the event compere.

This caps off a particularly special year for the entire company, who celebrates 18 years in business this month, with Karl Tatler Lettings claiming three gongs at the 2015 Lettings Agency of the Year awards earlier in the year.

The Estate Agency of the Year awards are in association with The Sunday Times and The Times.

The judges’ comments for each of Karl Tatler’s awards can be found here: http://estateagencyoftheyear.com/estate_agency_of_the_year/overall_winner/index.html