Following last week's base rate cut from 0.5% to 0.25%, most banks are planning to lower their standard variable mortgage rates.

Eight out of the UK's 10 biggest mortgage lenders are to lower their standard variable rates or 'reversion rates' for all their customers from September.

A standard variable rate (SVR) is the interest rate mortgage holders pay after their initial deal period has finished.

Halifax is the only major lender that hasn't announced a cut for SVR customers, though Lloyds is only dropping its SVR for those who have held mortgages with it since before June 2010.

What are the news SVRs?

Before last week the Bank of England base rate had been the same for over seven years, staying at 0.5% since March 2009. But on Thursday 4 August it was reduced to 0.25% in an attempt to encourage banks to make borrowing cheaper and therefore stimulate more consumer spending.

At 4.54%, Virgin Money's updated SVR will be the most expensive out of the 10 biggest lenders. Customers on its 'loyalty rate' (those who have held the same mortgage for seven years) will pay 4.29%.

The table below contains full details of what the 10 biggest mortgage lenders have said they will do. 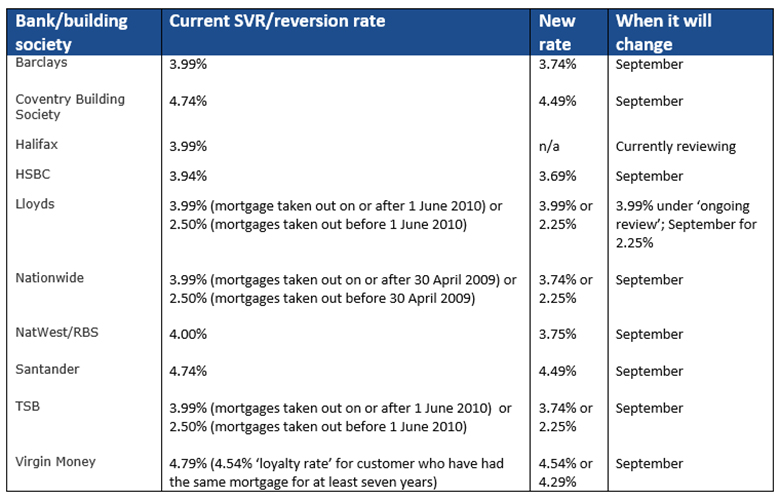 If your mortgage is directly linked to the base rate, for example a tracker mortgage, your rate is likely to have dropped automatically. The exception is some mortgages with a 'collar', where the interest rate will never drop below a certain level.

For example, if you have a mortgage that tracks at 2% above the base rate (ie, until last week, 2% + the base rate of 0.5%) and it has a 2.5% 'collar', your mortgage won't get any cheaper with the new 0.25% base rate because you're already paying the lowest possible rate under the terms of your deal.

Check your mortgage's terms and conditions to see if this applies to you.

Remortgaging could still save you money

Even if your interest rate will drop following the base rate fall, it's still worth checking to see if you could get a better deal by switching mortgage. Some recent deals have launched with record-breakingly low interest rates.

Although the best mortgage rates are typically only available to people with large deposits, eg 35% or 40%, if you have a smaller deposit you may still be able to find a cheaper deal.

For outstanding, no obligation, mortgage advice, contact your local branch and we can refer you to our independent mortgage advisor.